General update: As you've probably heard, supply chain problems are affecting every aspect of book production right now. Paper and certain binding materials are taking much longer than normal at the mill, if they're even being produced. Printers are overwhelmed with jobs and the jobs are moving slower than ever. One of our regular printers, who can normally deliver a hardcover book in 10 to 12 weeks, is currently booking hardcover delivery dates in JULY of next year. We're still sending books to the printers, but the printing stage is going to take much longer than normal for a while, and slipcases and traycase are also seeing delays. We thank you in advance for your patience!

The Best of Shivers edited by Richard Chizmar:
Proofreading has been completed for this title, and there is now only one more author who needs to sign the signature sheets and then this one will be ready for the printer. This author has had the signature sheets for close to two years now. We're encouraging him to just return them, signed or unsigned. We will post an update when they are returned.

Caretakers by Tabitha King:
This book is completely designed, proofread, and ready for the printer as soon as the author has time to sign the signature sheets.

Dark Debts by Karen Hall:
Work has started on this title, but we are still waiting on the introduction from Stephen King, so we're unable to estimate the publication date at this time. We will post an update as soon as we know more. You can now see the final cover artwork on the product page.

Dark Screams edited by Richard Chizmar and Brian James Freeman:
This book is now ready for the printer.

Dissonant Harmonies by Brian Keene and Bev Vincent:
This exclusive CDCC 11 project is almost ready for the printer. 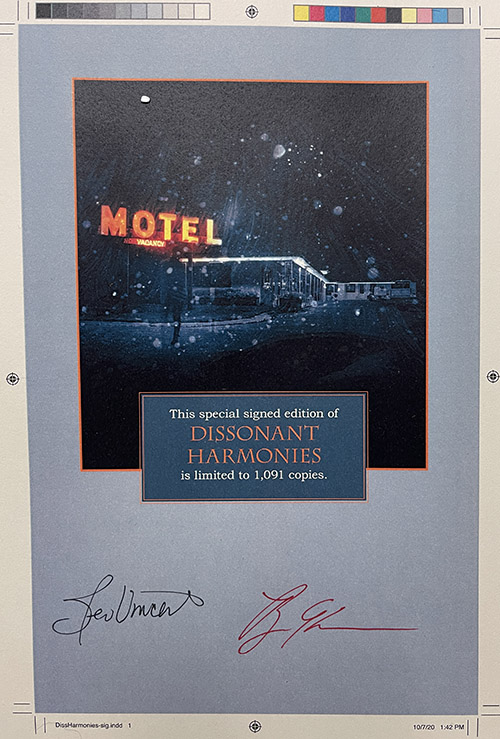 Four Shadows (Cemetery Dance Exclusive Collectors Set #3):
The third book for the Cemetery Dance Collectors Set #3 has been changed because the author for the book we wanted to use hasn't been able to finish the manuscript, and we want to keep the set moving. Luckily, we had another book coming along on our list that was meant to be used in some kind of deal or promotion (we hadn't decided what yet) and we were able to slide it over to be the 3rd book in this set. The new book includes four novellas by five terrific authors (one of the novellas is a collaboration) and all of the authors are signing the signature sheets.

The signature sheets are now signed, and this one is now ready for the printer! 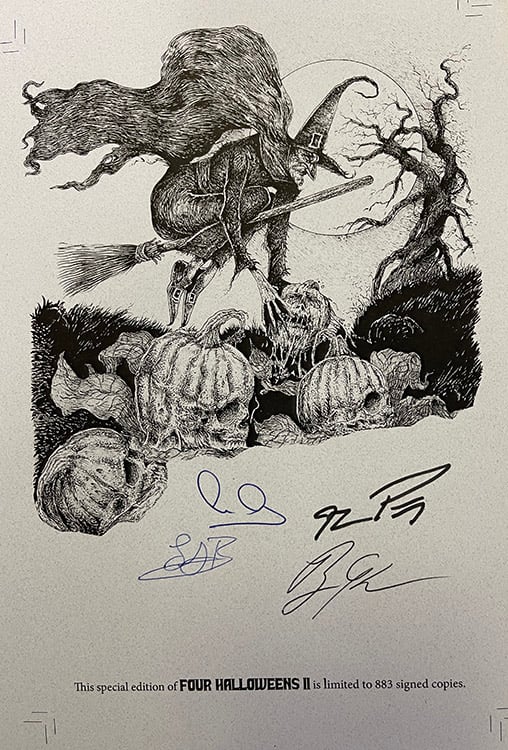 Flight or Fright edited by Stephen King and Bev Vincent (ARTIST EDITION)
We're very pleased to report only one more person needs to sign the signature sheets! We're still working on getting those into his busy schedule, but we will post an update when they are done!

Previous Update: We can now share some production news on the Gift Edition and Lettered Edition for the collectors who selected those editions, which will see print next year for reasons that will become apparent with this update: We're upgrading the book's design to TWO COLOR interior printing on a larger trim size, which wasn't promised originally. We're also thrilled to report that while we originally planned on six or seven exclusive illustrations from Cortney Skinner that won't appear in the trade hardcover edition, he's been working day and night to deliver 17 (!) pieces of artwork instead, one for each story! Also, as we have mentioned before, the Lettered Edition will be housed in a custom-made box unlike anything we've ever produced for ANY book ever before. In fact, it's been a very long time since any publisher has attempted this style of case for a Stephen King book. We'll let you know how things work out!

The Girl Who Builds Monsters by Brian James Freeman and Vincent Chong:
The trade hardcover of this book was published last September. The signed editions will be printed in 2022. 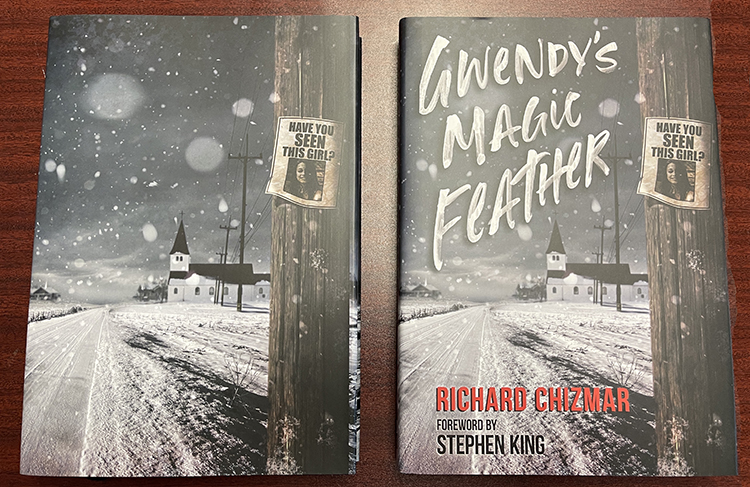 Halloween Carnival edited by Brian James Freeman (Cemetery Dance Exclusive Collectors Set #3):
This book has turned into a whopper at 536 oversized pages, but it is now ready to be send to the printer as soon as possible.

In Sunlight and in Shadow edited by Lawrence Block:
We're very pleased to report the signature sheets have been signed, and this book is now ready for the printer.

Interview With the Vampire by Anne Rice:
This book is now ready for the printer.

Intro to Alien Invasion by Owen King and Mark Jude Poirier:
Everything is ready for this one now that the signature sheets are done.

Seasons of Terror edited by Richard Chizmar:
All of the artwork and lettering is done, and everything is being proofread now. Simon and Schuster is waiting for some minor art revisions to one story and then they will schedule their edition, which will allow us to schedule our edition. 2022 is looking very likely.

Sharp Objects by Gillian Flynn:
The book is in production, the signature sheets have been signed, and the book has started the final round of proofreading.

Shivers VIII edited by Richard Chizmar (Limited Edition)
This book is now ready for the printer.

Shocklines: Fresh Voices In Terror edited by Richard Chizmar & Matt Schwartz:
This book is now ready for the printer.

The Stand by Stephen King:
Although not "officially" announced yet, we know there are just a ton of collectors and readers who want to know more about this project, so we're adding it to the Production Updates page to make it easier to share information. Sorry we didn't think to do this sooner.

The last of what we are waiting for from the artists (there are now multiple artists on the project) is due soon, and then the book will be 100% ready for the printer. This thing is going to be a beast. Imagine our edition of IT for a size comparison.

The printing and slipcase process isn't going to be fast, unfortunately. Both industries are having some bad supply chain problems this year, especially for the more unique materials, but even for some common stocks, too. (Our slipcase maker is telling us to expect "regular" slipcase orders to take up to 16 weeks now. And we sent a different book to the printer back on August 1 in the hopes that it be done for a February publication date.)

The plan is to make the official "public" announcement of The Stand and sell the remaining preorders after the book is rolling at the printer for a while. But to give you an idea of the size, here is a photo of the stack of proofreading pages: 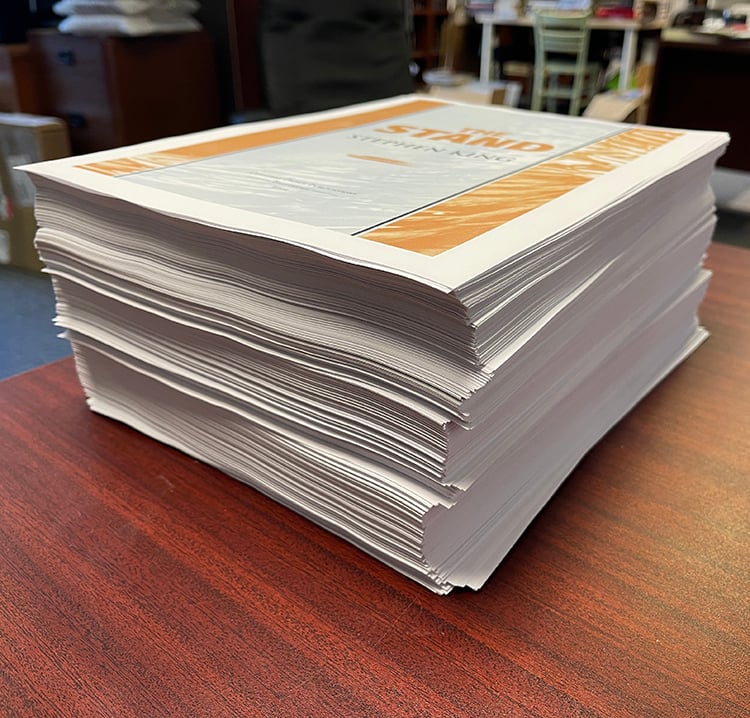 Strange Weather by Joe Hill:
The Limited Edition and Lettered Edition are now completed at the printer, and the slipcases and traycases have been started. Due to extended production times for the slipcases and traycases, we expect this one to ship in early 2022. By the way, while we were waiting on the signature sheets last year, we went ahead and added INTERIOR ARTWORK to each of the novellas! This wasn't part of the originally announced project, but since we had the time, we wanted to make the books even more special for you. Thank you again for your patience! 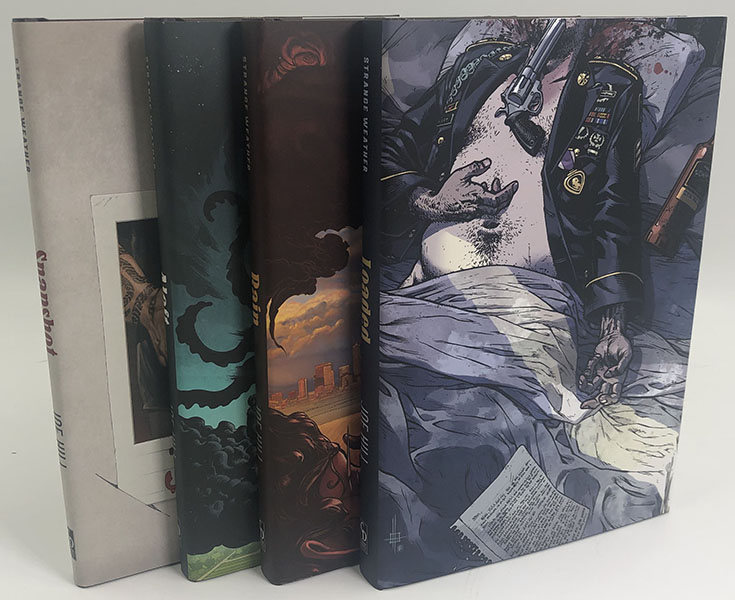 Stephen King Revisited:
All of the essays have been completed, so this one just needs a final round of proofreading.

Suffer the Children by John Saul:
The book is in the proofreading stage.

10/31: The Butcher's Story by Norman Partridge (Four Days of Halloween promotion, formally called Oktober Shadows):
Here is the latest update from the author: "Going through and revising chapter by chapter to change up some character stuff, and then I need to write the end. I figure it'll end up about 40 - 45 k. It's basically a seventies horror movie (that takes place in the early eighties) mashed up with 'something in the woods'--that's the Halloween train fun ride, scarecrows, etc., but really something bigger about the heart of the holiday itself. With the characters, it's about what you'd do/how you'd react if you knew you weren't going to make it out of a situation alive."

The Southern Reach Trilogy by Jeff VanderMeer:
Good news! The books were completed at the end of October, and they turned out beautifully. We've sent a finished book to our slipcase maker for proper sizing and they're starting their part of the job now. Thank you for your patience! 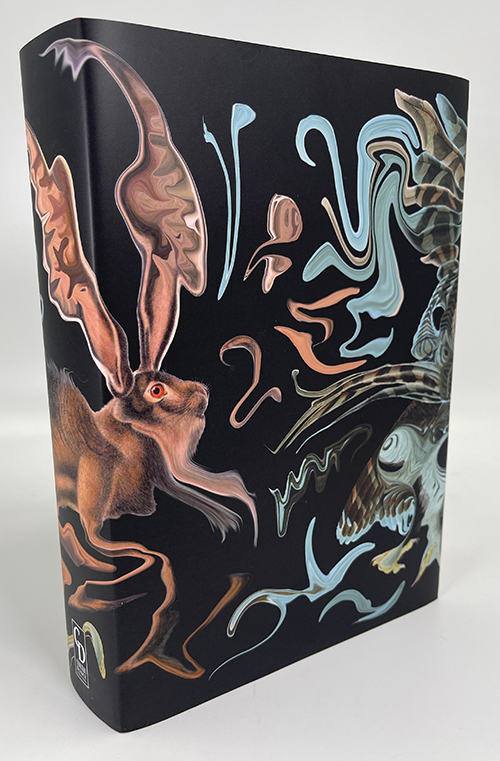 Things I Didn't Know My Father Knew by Peter Crowther:
The trade hardcover has shipped and the Limited Edition will be shipping as soon as the slipcases are completed.

Tomorrow's Journal by Dominick Cancilla:
The Limited Edition is in production now.

Everything is now ready, and this book will be sent to the printer as soon as possible.

The artwork is in progress, the signature sheets have been signed, and the book is completely proofread.

We're All In This Together by Owen King:
This title will be ready to go to the printer later this year.

Cemetery Dance Magazine Hardcovers:
The Cemetery Dance magazine hardcovers have been in a holding pattern while we searched for a new printer who could produce this trim size with our preferred binding style (to keep them all looking the same), but we're pleased to report we've found a printer and they're printing some samples for us now. If all goes well, we'll have FIVE issues of the magazine out in hardcover at the same time.

Books From Other Publishers, Custom Slipcases, and related items:

Custom Slipcase for Gwendy's Magic Feather (trade hardcover):
These have now been completed at our slipcase maker and will ship in December.

Custom Slipcase for Later (trade paperback):
Due to delays with our slipcase maker last year, we do not expect this one to be ready until the first half of 2022.

Custom Slipcase for Billy Summers (trade hardcover):
As noted above, we do not expect this one to be ready until the first half of 2022. Once this slipcase is done, though, we should be fully caught-up on slipcases.We apologize for the delay, and thank you for your patience!

Night Shift:
The binder for the book has ordered his materials. Once the books are completed, he'll begin making the special cases that we only use for the Doubleday Years Lettered Editions. We'll post a schedule when he has given us a better feel for how long everything should take! Here is a photo of the prototype book to give you an idea of what the finished production will look like: 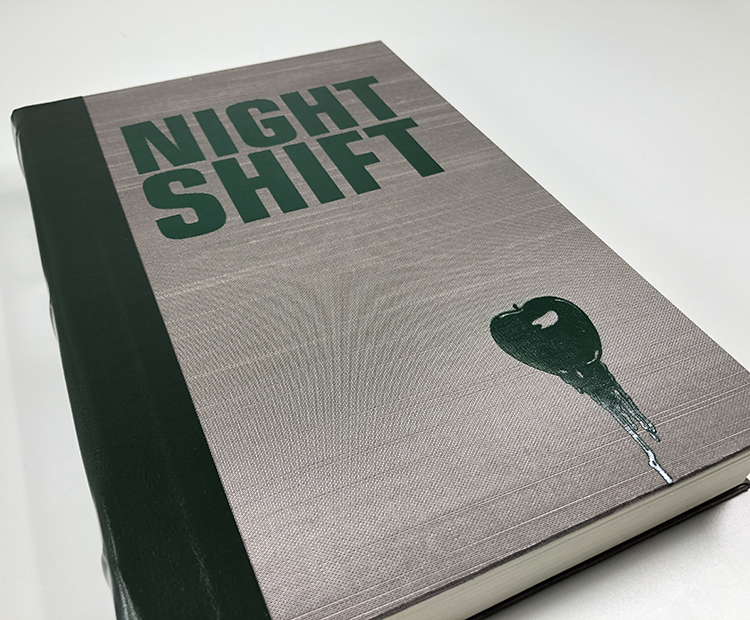 The Illustrated Stephen King Movie Trivia, Chills, Lost and Lonely, October Dreams II, The Best of the Scream Factory, The Exorcist for the 21st Century, Midnight Under the Big Top, Usher's Passing

Thank you for your patience!