About the Book:
They make an unlikely fifth column: a disgraced priest, a bomb-making nun, a cross-wearing rabbi, and a lesbian atheist. But desperate times call for desperate alliances, and these are most certainly desperate times. You see, the undead have pretty much won. They've taken Europe, the Mid East, and most of Asia. They crossed the ocean and turned the US government. They've consolidated their hold on the East Coast and are honing their plans for the rest of the country. The survivors exist in fear and isolation, with no one to rally to. Until Father Joe Cahill decides to take back his old desecrated church and say mass again. Just once.

Publisher's Note:
This full-length novel is over 400 pages long and set in the same world as the F. Paul Wilson novella of the same title that was published by Pulphouse over a decade ago. Lavishly illustrated by Harry O. Morris with dustjacket, endpaper, and interior artwork, and limited to just 448 copies, this Limited Edition won't last long!

From the Author's Note:
"Midnight Mass was born out of my dissatisfaction with the tortured romantic aesthetes who have been passing lately for vampires. Stephen King gave us the real deal in 'Salem's Lot, but what gives since then? I wanted to get back to roots--go retro, if you will--and write about the soulless, merciless, parasitic creatures we all knew and loved."

F. Paul Wilson was born and raised in New Jersey where he misspent his youth playing with matches, poring over Uncle Scrooge and E.C. comics, reading Lovecraft, Matheson, Bradbury, and Heinlein, listening to Chuck Berry and Alan Freed on the radio, and watching Soupy Sales and Shock Theatre with Zacherley.

He is the author of more than thirty books: six science fiction novels (Healer, Wheels Within Wheels, An Enemy Of The State, Dydeetown World, The Tery, Sims), eight horror thrillers (The Keep, The Tomb, The Touch, Reborn, Reprisal, Nightworld, Black Wind, Sibs), three contemporary thrillers (The Select, Implant, Deep As The Marrow) and a number of collaborations. In 1998 he resurrected his popular antihero, Repairman Jack, and has chronicled his adventures in Legacies, Conspiracies, All The Rage, Hosts, The Haunted Air, Gateways, and Crisscross.

The Keep and The Tomb both appeared on the New York Times Bestsellers List. Wheels Within Wheels won the first Prometheus Award in 1979; The Tomb received the 1984 Porgie Award from The West Coast Review of Books. His novelette “Aftershock” won the 1999 Bram Stoker Award for short fiction. Dydeetown World was on the young adult recommended reading lists of the American Library Association and the New York Public Library, among others. He is listed in the 50th anniversary edition of Who's Who in America.

Photos of the Deluxe Lettered Edition: 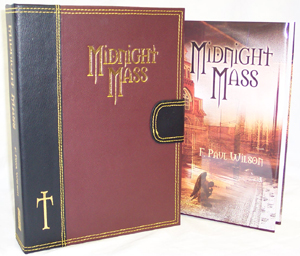 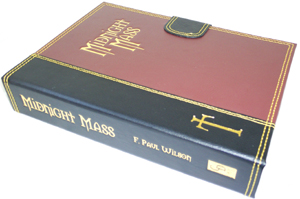