About this Special Edition:
Cemetery Dance Publications is proud to announce the world's first deluxe, collectible hardcover edition of this acclaimed anthology! This massive oversized special edition will weigh in at 545 pages and feature a mind-blowing 9 X 12 trimsize, just likeThe Secretary of Dreams by Stephen King! To make this an even more special edition, Glenn Chadbourne has contributed nearly thirty original drawings and paintings, which is another reason why some collectors are now calling this a great companion to the The Secretary of Dreams! (See some sample images below and even more samples in our Free Extras section on this website.)

You don't need a movie theater or a DVD player to savor the best in cinematic terror and suspense. All you need is your own imagination and this collection of spine-tingling scripts by the titans of shock storytelling. Whether you're a movie buff or a thriller freak, you'll savor these seven full-length film and TV scenarios, including Stephen King's "General," Richard Matheson's "The Legend of Hell House," and Richard Laymon's "The Hunted," plus chilling works by Harlan Ellison, Joe R. Lansdale, and Ed Gorman. With a fascinating introduction on fright films by #1 bestselling author Dean Koontz.

Richard Chizmar is the founder and publisher/editor of Cemetery Dance magazine and the Cemetery Dance Publications book imprint. He has edited more than a dozen anthologies, including The Best of Cemetery Dance, The Earth Strikes Back, Night Visions 10, October Dreams (with Robert Morrish), and the Shivers series. Together Chizmar and Johnathon Schaech founded production company Chesapeake Films, and they've written screenplays and teleplays for United Artists, Showtime, Sony Screen Gems, Lions Gate, NBC, and many other companies. Their first projects include adaptations of Stephen King's From a Buick 8, Douglas Clegg's The Hour Before Dark, Stephen King's and Peter Straub's Black House, Ed Gorman's The Poker Club, as well as episodes of Showtime's Masters of Horror and NBC's Fear Itself.

Martin H. Greenberg is the genre's premiere anthologist. He lives with his wife and young daughter in Green Bay, Wisconsin, where he is a college professor. He has several grown children. Over the years he has collected stories for more than 100 books.

Production Status:
The book design has been completed, and the final artwork is in place, so the book is going through the proofreading process and will be sent to the printer in early summer. Be sure to view some of the sample artwork in the artwork gallery for this title. Visit our official production update page for the latest news and updates about this and our other forthcoming projects.

Sample of the Interior Artwork by Glenn Chadbourne: 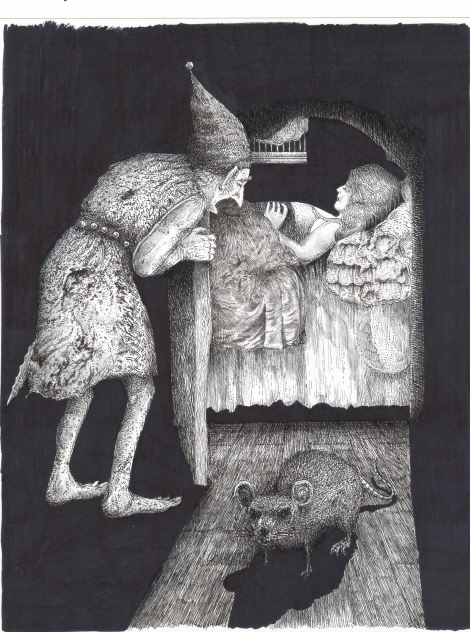 Click here to see a lot more samples of the interior artwork!