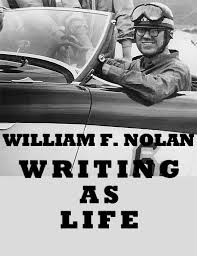 William F. Nolan’s collected essays, Writing as Life, examines how Nolan views popular culture, the business of writing, other writers and influences on his creative process. Nolan’s writing and accomplishments are prodigious, and in this volume, he shares a life relating back to his artistic influences.

In the preface, Nolan confesses, “I’ve grown comfortable in my own skin after all this time, and I have nothing to hide or any need to be liked for either what I am or what people may think I lack at this date … so enjoy the show,” which could easily be a dust jacket blurb. Writing as Life is not a salacious tell-all story dishing out lurid gossip, but rather a very honest account of a writer’s life, career, family, friends and personal recollections. Indeed, Nolan’s memories of his parents’ marriage and how the church unduly influenced his mother’s marital choices was both disturbing and heartbreaking.

Writing As Life is also a delightful literary time machine. Nolan’s childhood memories are vivid and a reminder artists keep their inner child protected so that they can create with honest emotion. Nolan relates some of his boyhood obsessions, including reading superhero comics and collecting in the 1940s. Although Nolan’s recollection of prematurely selling a comic book collection for $5 that would today likely fetch a price somewhere in the millions if well-preserved is unfortunate but candid, his memories of comics are endearing, and you will have to read Writing as Life to discover why he titles the chapter, “The Guys in the Trick Suits.” Nolan describes the cultural emergence and historical background of superheroes, and how Jerry Siegel and Joe Shuster were likely influenced by Philip Wylie’s book Gladiator when creating Superman. Nolan, in discussing psychiatrist Fredric Wertham (Seduction of the Innocent, 1954), is astute to mention that there were also detractors to Wertham’s fervent 1950s comic book censorship campaign.

“The Night Dillinger Didn’t Die” is intended for fans of true crime and revisionist history. It reexamines John Dillinger being gunned down by FBI agents outside Chicago’s Biograph Theater on July 22, 1934. Although it is difficult to imagine how a patsy could have been engineered, Nolan lays out a clear case how the notorious bank robber could have survived his supposed last moments on earth, and the mystery intrigues.

Nolan also shares the life of Max Brand, a writer of pulp fiction westerns and poet. Max Brand was just one of the pen names of Frederick Schiller Faust, a wildly successful author during the pulp era, with a contract guaranteeing 50K a year, and in many years, Faust earned 100K or more. He created Dr. Kildare, just one of his famous literary creations, and penned dozens of novels, including Destry Rides Again. Remarkably, Faust wanted to be a poet more than a novelist and would typically spend half the day working in prose and half composing verse, although the prose entirely paid the bills and guaranteed his place in history. Faust read the classics and desired acclaim as a serious poet, despite publishers’ widespread rejection of his verse. It is intriguing Faust never let the inability to publish his poetry stop him from writing poetry, and that he gave equal time to prose and poetry. Faust died heroically as a WWII war correspondent on the front lines of combat and was as heroic as many of his own characters. The way Nolan relates Faust’s career shows his fondness for writers who came before him, and his care in studying other writers and their process.

Nolan then chronicles the larger-than-life machismo of Ernest Hemingway, and recounts the numerous physical injuries he miraculously survived. Papa’s wounds would have felled an ordinary man, and yet he recovered only to, in the end, take his own life, possibly because of depression. Hemingway could not respect someone who had never been wounded while testing his courage, a personal idiosyncrasy. According to a friend, Hemingway’s entire relationship with his son changed after Papa’s son had suffered war wounds, forging a close bond between the two. Although much has been written about Hemingway’s life, Nolan presents Hemingway’s last years with a fresh perspective. Hemingway’s life is a vivid counterpoint to James Dean’s tragic death in an auto accident at the height of Dean’s screen fame, contrasted to the end of Hemingway’s immense literary career. There is also a remembrance of Charles Beaumont’s shortened career as a novelist and screenwriter from Alzheimer’s disease, and the tragedy of Beaumont’s early passing to his family, friends and the world of fantastic literature.

In many of Nolan’s narratives, one of the thematic constants is death and how it presents to artists. Although John Dillinger was an outlaw, his colorful life illustrates someone who may have cheated death and created a false history of true crime. With Frederick Faust, we are presented with a writer’s life and experience his wartime heroism. We understand Hemingway’s suicide with more perspective and re-experience James Dean’s accidental death. Certainly, with Faust, Hemingway, Dean and Beaumont many will wonder what they could have created if they had lived longer, the eternal question asked of great artists who die prematurely.

As a writer, Nolan relates his California circle, including Ray Bradbury, Charles Beaumont, Richard Matheson, and Robert Bloch, “The Group’s” core members, five famous friends who shared writing, collaborated and engaged in all-night café gab sessions. Indeed, the artists profiled in Writing as Life are exceptional glimpses into artistic careers. In discussing Richard Matheson, Nolan recounts a time where Matheson within six weeks needed to produce “a screenplay for another Poe film, turn out a one-hour teleplay for the Hitchcock show, do an hour Twilight Zone, edit the final manuscript on my latest novel, and come up with a 50-page outline for the next one. I’m so busy it’s ridiculous.” While it was a good problem for Matheson to have, many writers would feel overwhelmed with just one or two of those tasks due in six weeks. Nolan also recounts Matheson as metaphysician of the afterlife, giving an optimistic summation of the soul and life after death circumstances that is well placed after the previous chapters discussing the life and death of famous writers.

Nolan writes with the authenticity of an admirer who knew many oversize personalities quite well, even if he did not personally meet all of them. Nolan’s authentic description rises to the level of knowing his subjects well through carefully woven research and biographical narrative.

Suggestions are few. In the proof copy reviewed, there is no indication where Nolan’s essays were originally published, although dates may be added in the final version. This makes it difficult to know if any of the essays are unique to this collection. Also, the partial bibliography of Nolan’s work ends prematurely in 2010, and so including the past decade of Nolan’s career would also be useful for collectors and scholars. Also, Nolan was a biographer of Steve McQueen, and McQueen’s exploits would have fit in well with James Dean, Frederick Faust and Ernest Hemingway’s lives. I miss this omission, but you can read about McQueen in a different Nolan biography.

William F. Nolan’s Writing as Life is recommended to collectors, artists and readers who share a deep and abiding love for the creative process of fiction and nonfiction. If you enjoy thinking about the writing process as it relates to life, Nolan’s essays are a good place to expand your journey and explore the depths of imagination and wander through history, the writing process and literary biography.