The past is resistant to change, and so, too, are many fans when it comes to adaptations of Stephen King’s novels. How many liberties should a screenwriter take with a literary work? (“The book’s always better, everybody knows that,” Sadie says the first time she meets Jake in the 11.22.63 miniseries.)

11/22/63 might have an advantage in that it’s a relatively new novel, one that hasn’t been firmly entrenched in readers’ minds as other works. Also, some adaptations remain essentially true to the source material despite making significant changes. Dolores Claiborne comes to mind, an underappreciated adaptation that deletes characters, brings others to the forefront, invents scenes, but captures the book perfectly.

This is the case, too, with 11.22.63. Once you go down “The Rabbit Hole” in the first episode (about 50% longer than the seven subsequent episodes), you are in a somewhat different world than the one Stephen King imagined. The rabbit hole leads to 1960, two years later than the date used in the novel. In the past, Jake Epping (James Franco) adopts the pseudonym James Amberson instead of George[1]. The change makes sense: the story has another significant character named George (de Mohrenschildt), and café owner Al Templeton (Chris Cooper) argues that he can still call himself Jake, which will make things easier.

This is only the first of many differences in this Hulu adaptation. Unlike Netflix, Hulu will be doling out the eight installments on a weekly basis, starting on February 15 (President’s Day), so it will take you two months to watch the whole thing unless you decide to save up and binge. I got to see the whole thing at once and I found it to be a very binge-worthy series. However, in this preview, I’m going to restrict myself to discussing the first episode. Later on, I’ll do a “mid-season” report and then an overall review once all eight episodes are available. Also unlike Netflix, the series had to be constructed around commercial breaks, though the intrusions are few and far between and not overly disruptive if you have the commercial-free option.

The first episode starts with a terrifying recreation of the fateful Halloween night in 1960 when Harry Dunning’s (Leon Rippy) father (an intense Josh Duhamel) killed the rest of his family and permanently maimed Harry, a janitor at the school where Jake teaches English, including a class for adult learners. In the novel, Jake’s first experiment in the past is an attempt to change Harry’s fate—in this miniseries, that exploit is reserved for later.

Jake is at a crossroads. His father died recently, his writing is at a standstill, and he meets with his wife at Al’s diner to finalize their divorce. During their brief meeting, Al excuses himself and comes back a couple of minutes later looking like crap. He collapses—he came down with cancer during this brief hiatus, apparently. Al sends Jake through the rabbit hole into 1960 and then presents the teacher with his mission which, in heroic journey tradition, Jake resists. But then Al dies and Jake decides it’s worth a couple of minutes of his time to try to save Kennedy. 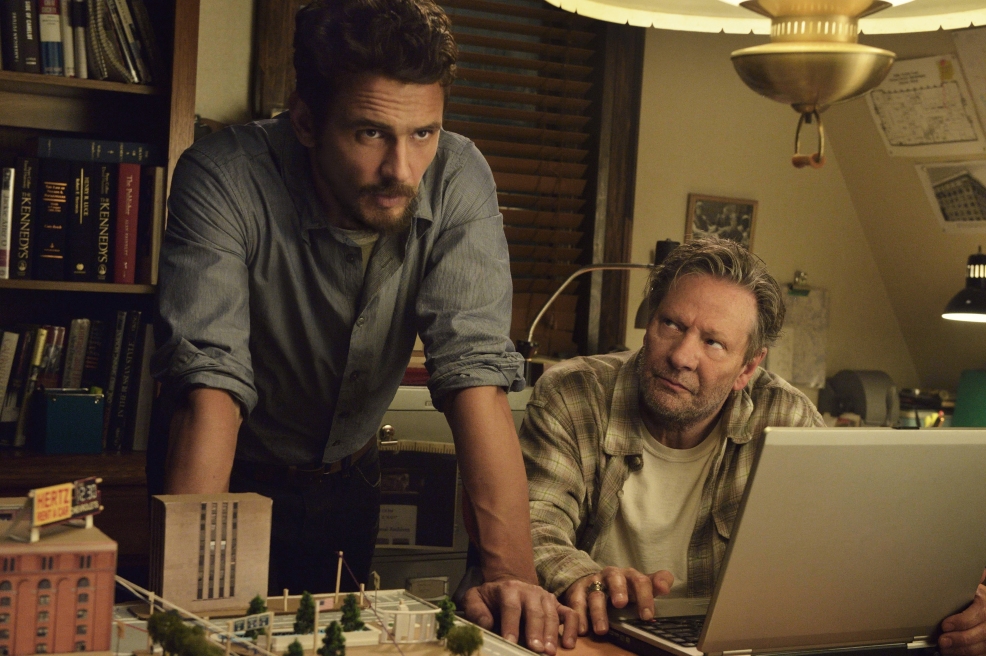 It’s hard to imagine anyone doing a better job of portraying crotchety Al Templeton than Cooper. Even though the character dies during the first episode, that’s not the last we see of Al, who reappears in flashbacks throughout the series, a clever way of distributing some of the exposition instead of dumping it all at once at the beginning. He becomes a kind of Greek chorus, providing voice-over narration for some of Jake’s exploits.

The miniseries gets greater use out of the yellow card man, who isn’t anchored to the mill yard and who will prove to be a tragic figure. His yellow card, it should be noted, does not change color as it does in the novel, but it does feature the ouroboros symbol. His mantra “You shouldn’t be here” is repeated in different contexts by different characters throughout the series.

On his third trip to October 21, 1960, Jake heads straight for Dallas (something he doesn’t do for years in the novel) after an encounter with some thugs that is an omen of worse things to come. At Dealey Plaza he has a “meet-cute” moment with Sadie Johnson (nee Dunhill, played by Sarah Gadon), who is still with husband Johnny (Grey’s Anatomy’s T. R. Knight). What Jake doesn’t realize is that he recently had another passing encounter with her.[2]

Jake’s cross-country trip introduces him to some of the social changes he’ll have to deal with—from the price of things, to avoiding anachronisms, to the social mores of the era, to segregation in the South, to the inadvisability of cursing around a nun, to the butterfly effect, which means that he has to interact with people as little as possible to avoid causing unintended consequences.

Still, he’s in Dallas in 1960, not hiding out in communities along the way, writing crime novels, so the screenwriters have to give him new things to do—the latter third of the first episode consists entirely of new material. Jake follows George de Mohrenschildt to a campaign appearance by Kennedy (the election is less than a month away, although Kennedy’s stop in Dallas happened in September in the real world) and crashes the VIP reception, giving him the opportunity to brush shoulders with Jackie Kennedy.

Even in 1960, the past knows what Jake is up to and pushes back (the word “obdurate” is noticeably absent from the miniseries!). He’s almost killed by a car, is plagued by cockroaches and experiences a series of amusing near-misses while trying to spy on de Mohrenschildt. After another, more tragic incident, Jake decides the stakes are too great. He heads back to Lisbon, Maine, with a stop in Holden, Kentucky along the way (not Derry!) to try to do at least one good thing in the past.

Some people weren’t impressed when the role of Jake Epping went to Franco. They needn’t have worried. Jake is an everyman, the viewpoint character through which we see everything. So long as he’s charming, that’s all that’s required, and Franco is that. It’s easy, though, to see why he’s smitten by Sadie the moment he sees her, though—she is lovely and endearing. 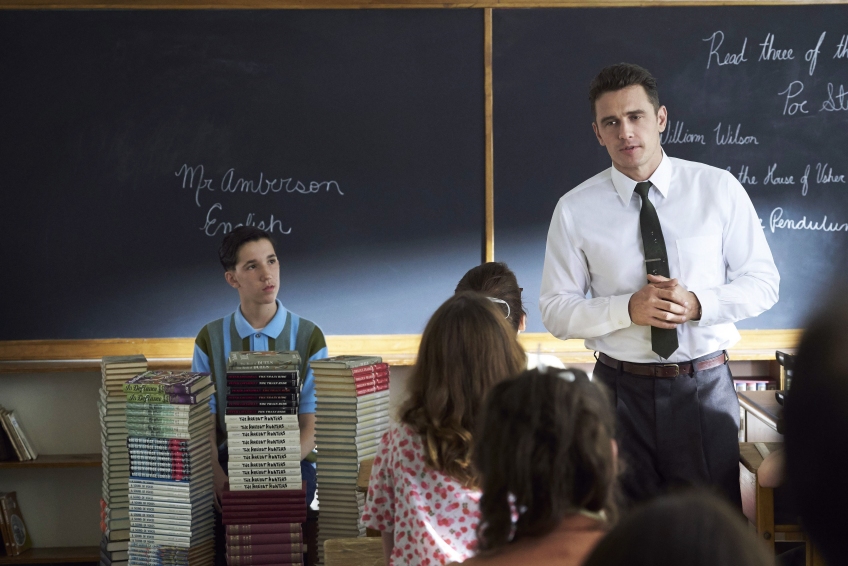 Once you accept that the story as you know it from the novel is subject to radical changes, all bets are off, which actually makes the miniseries more intriguing. Slavish adaptations are of little interest, because viewers know every beat and major incident. There’s a huge change coming in episode 3 that finds a way to solve the problem of Jake having to talk to himself all the time. It sets up some incidents that aren’t present in the novel but they work because it makes the visual storytelling easier.

The production values are top-notch. This starts with the opening credits, which cleverly bring the “conspiracy theory nutcase” cliché of a wall of photos and articles joined by pieces of string to life. The show has a Mad Men look and feel to it, and, in fact, Franco’s character occasionally reminds me of Don Draper, though he’s less of a bastard—most of the time. The period scenery looks and feels genuine, and the mood is enhanced by good use of music.

Fans of such things should keep an eye on the background and the surroundings for call-outs to things from other King works, including business names (Blue Ribbon Laundry), dialog (Jake is Kennedy’s #1 fan), significant graffiti (alas, no Bango Skank, unless I missed it), and a most memorable automobile.

There is abundant cursing in the miniseries (Al advises, “If you do something that fucks with the past, the past really fucks with you”) and some sensuality but no nudity.

There have been a lot of hit and miss television adaptations of Stephen King’s work over the past couple of decades, but this is most definitely one of the good ones.

[1] If you take a close look at his ID papers, you’ll see that George Amberson is James’s father.

[2] There’s a clue in the closing credits if you pay attention!