When Joe Lansdale speaks, you listen. A fearless writer and natural storyteller who moves effortlessly between genres, Lansdale has made a career out of doing what he wants. He counts Stephen King, Joe Hill, and Dean Koontz among some of his most vocal fans, and has been steadily earning a large and devoted following since his first novel, Act of Love, was published in 1981. Since then, hardly a year has gone by without a new Lansdale book on the market, sometimes more than one. He has now written nearly 50 novels, dozens of novellas, and hundreds of short stories. END_OF_DOCUMENT_TOKEN_TO_BE_REPLACED 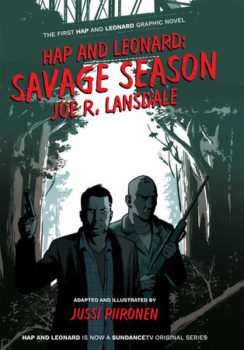 Joe R. Lansdale’s “Hap and Leonard” series isn’t the first thing that comes to my mind when considering what books would benefit from being adapted in graphic novel form. Lansdale’s series, about a couple of blue collar buddies whose keen sense of right and wrong gets them into escalating amounts of trouble with bad guys and good guys alike, is elevated by the author’s sharp dialogue and natural storytelling ability—two things which could easily be lost in translation when moving to the more visual medium of comics. END_OF_DOCUMENT_TOKEN_TO_BE_REPLACED

Many colorful descriptors have been affixed to describe the work of ten-time Bram Stoker Award-winning author Joe R. Lansdale, but reigning champion of mojo storytelling (as coined by Lansdale’s friend and webmaster Lou Bark) is the most fitting way to express his dynamic style. Throughout a prolific career, Lansdale has produced an astounding assortment of unique tales gracefully two-stepping between the pulp and the profound. His work is gritty, funny, and violent, characterized by biting dialogue and Lansdale’s ability to seamlessly cross genres while remaining conscious of history and storytelling tradition. Lansdale’s distinct literary voice regales his readers with tales of rough-and-tumble anti-heroes ready to throw down against dangerous criminals, serial killers, and occasional otherworldly monsters running amok in East Texas. END_OF_DOCUMENT_TOKEN_TO_BE_REPLACED